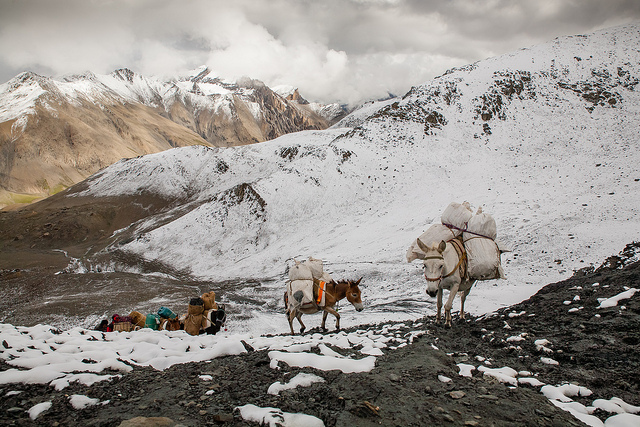 Dolpa District a part of Karnali province is one of the seventy-seven districts of Nepal. The district borders Tibet (China) on the north and northeast, Jumla and Mugu districts of Karnali on the west, Myagdi, Jajarkot and Rukum on the south, and Mustang on the east. A large segment of the district is ensured by Shey Phoksundo National Park. The name is derived from the twelfth century Shey Monastery and the most profound lake in Nepal, the Phoksundo Lake, both of which lie in the area. The Shey phoksundo National park secures endangered animals like the snow leopard, musk deer, and the Tibetan wolf. Shey Phoksundo is the biggest and the sole trans-Himalayan National Park in Nepal.
The Dolpa region is the natural embodiment of high passes, rare Flora and Fauna, and sweeping vistas, and which is enriched by the traditional Tibetan cultural heritage. This region is surrounded by Mount Dhaulagiri (8167m) seventh highest mountain in the world and Tibet from the south and north respectively, is regarded as a blend of Natural and Cultural Phenomena. It was opened in 1991 for trekking. This region lies on the north side of the Himalayas, and this region is also known as the rain shadow and the climatic situation of this place is the same as that of Mustang. One of the longest treks in Nepal is Dolpa trek; the maximum elevation can be up to 4530m to 5115m and is one of the difficult treks of the country. The trek in the Dolpa region can be divided in to lower Dolpa trekking and upper Dolpa trekking, depending upon the choice. Upper Dolpa is relatively remote, least developed, with few people living in comparison to lower Dolpa. However, both lower and upper Dolpa are equally incredible in terms of beauty and Natural resources. Trekking in Dolpa region can solely be done within the same region or can be also done Dolpa to Mugu then to Rara Lake or Dolpa to Mustang trekking via several passes.  The best time to trek Dolpa region is from March to May and September to October. Himalayan Icefall trekking can arrange trekking to both lower and upper Dolpa as per the tailor made itinerary or also as per our general itinerary too.

Upper Dolpo or Dolpa trekking trail is a remote and less explored area near the Tibetan border of Nepal. This area was only opened for...

Dolpa District a part of Karnali province is one of the seventy-seven districts of Nepal. The district borders Tibet (China) on the north and northeast,...